Getting to Know What’s Below the Belt

When I was quite young, my mother taught me about the correct names for different parts of the female anatomy. I think this was partly because she’d never been told when she was a child (and subsequently thought she was dying when she got her first period) and partly because it was the 70s, and women were becoming more empowered to talk about these things. However, this was news to my grandmother. So when, at the tender age of 3 or 4, I confidently told my grandmother that she had a vulva, she replied in horror, “No I don’t!”

That was over 40 years ago, so maybe not surprising. Yet there are still plenty of women in 2021, young and old, who continue to be unfamiliar and ashamed of their own bodies below the belt. Many women refer to the vulva as the vagina, and still more have no idea what it looks like. An episode of the ABC podcast Ladies, We Need to Talk found most women could quite confidently draw a roughly anatomically correct penis, but were unable to draw the clitoris, and many were not even confident where it was.

Why does this matter?

For a start, if we don’t know what’s normal in our own bodies, it’s hard to know when things are NOT normal, which could mean problems are missed. Being familiar and comfortable with our own anatomy also helps to reduce fear or worries when it comes to being sexually active, having babies and going through other life changes, such as menopause.

So, let’s go on an anatomical exploration of the vulva and learn what’s what down there.

You say vagina, I say vulva...

Let’s get this straight first up. The vulva and the vagina are not the same thing.

The vagina is the muscular tube that extends from just below and behind the urethra (where you wee from) and ends at the cervix (at the bottom of the womb, or uterus). From the outside, you can only see the vaginal opening, not the whole vagina. The diagram shows where the vagina sits in relation to the bladder, uterus and bowel.

The vulva includes many of the female genital parts visible from the outside. It extends from the mons pubis at the top, to the perineum (the area between the vagina and the anus). The vulva also includes the clitoris, the two layers of labia (or lips) and the openings of the urethra and vagina.

Let’s explore the different parts of the vulva further.

The mons pubis and pubic hair

The mons pubis is the fleshy, plump area that sits over the pubic bone. It’s plump as it contains fatty tissue, providing padding and protection for the pubic bone directly underneath it and the vulva in general.

The mons is usually covered in pubic hair – which is normal. Many women completely wax, laser or shave off all their pubic hair, believing that it’s more hygienic to be hairless. But in fact, the pubic hair plays a role in keeping the skin underneath soft, protecting the vulva from infection and maintaining moisture in the vulva. There is some evidence that women without pubic hair may be more likely to pick up sexually transmitted infections (STIs) than women with pubic hair!

There are four labium in total with two layers on each side of the vulva. The outer labia (labia majora) are a natural extension from the mons pubis. Like the mons, the skin on the labia majora is normal skin with fatty tissue underneath, giving them plumpness too. The pubic hair extends down along the outer aspects of the labia majora.

Many women become very concerned about the appearance of their labia, especially the labia minora, which has led to an alarming rise in the number of women having labioplasty surgery to alter the shape or size of their labia. The fact is, labia come in many shapes and sizes. It is not uncommon for the labia minora to extend out further than the labia majora for instance. Unfortunately, our opinion on what is normal is highly skewed by the very uniform vulvas shown in pornography. These are not representative of the true range of normal. To get a better idea of the many sizes and shapes of women’s labia and vulvas I recommend you check out the Great Wall of Vagina (yes it should be vulvas!) art installation in the UK. There is a similar one at MONA in Hobart that I was lucky enough to visit recently.

The clitoris is quite amazing, but gets a bit of a bad rap, partly because some people seem to have a hard time finding it. You may be surprised to know that it is MUCH bigger than most people realise. This may be because the full extent of the clitoris was only properly anatomically mapped in 1998 (yes you read that right!) by an Australian urologist. The video contained in this article gives some fascinating information about the clitoris and the history of its anatomical discovery.

The clitoris is essentially the female equivalent of the penis, and has a similar biological origin. Like the penis, it has erectile tissue which swells when women get aroused. But it has over twice as many nerve endings as the penis, so it is actually a lot more sensitive. It is believed that all women experience sexual arousal via the clitoris – which can undergo erectile changes not only with direct stimulation, but also with internal vaginal penetration and even stimulation of the nipples. 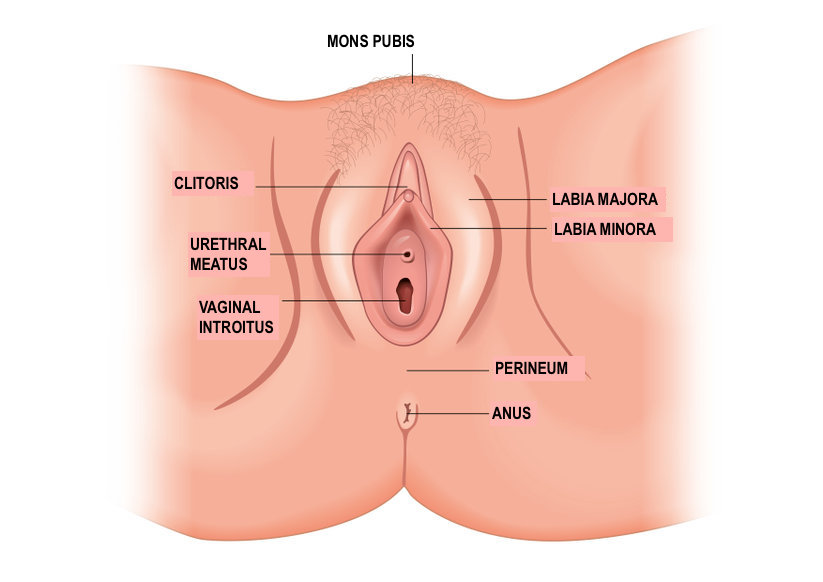 The urethra is the tube which carries urine from our bladder to the outside for urination. The urethral opening (urethral meatus) sits below the glans of the clitoris and above the vaginal opening, and can be quite small and difficult to identify in some women. In our reproductive years, oestrogen helps keeps the urethra plump and well moisturised. This assists with keeping the urethra closed when we are not ready to urinate, but also contributes to small amounts of natural discharge. After menopause, the urethra often becomes drier and more fragile, which can increase the likelihood of getting urinary tract infections.

The vaginal opening (introitus) is a more obvious opening at the lower end of the vulva. The lower ends of the labia minora fuse just below the lower part of the vaginal introitus, forming the posterior fourchette. Beneath that is the perineum, and then the anus. In women who have not had a baby or who have not been sexually active, the vaginal introitus is smaller and will generally be closed or only slightly open at rest. In older women, and especially those who have had vaginal births, the introitus may often look wider and more open at rest.

Most women who have not been sexually active will have a thin layer of tissue around or over the vaginal opening called the hymen. This tissue can vary a lot, being thin, or only partly covering the vaginal opening in some, thicker and more fully covering the opening in others, or even non-existent. It is not just vaginal intercourse that tears the hymen – this can occur from using tampons or even with some sporting activities. In rare cases, some girls have an imperforate hymen, which completely obstructs the vaginal opening. This requires surgical removal to enable the passage of menstrual blood and allow for intercourse later in life.

We have several different glands in the vulva which secrete fluid.

The Bartholin’s glands are on either side of the vaginal opening, and just behind it. These glands secrete fluid during sexual arousal, and at other times.

The natural secretions from the Skene’s and Bartholin’s glands along with those produced from our hormonal cycle, help keep the vagina and vulva healthy and lubricated. This is important to help maintain the “good” bacteria that should exist in the vagina and gives our vagina and vulva a natural self-cleaning mechanism. This helps to deter infections from foreign bacteria and other sources. It also means we DO NOT need to use soap, vaginal deodorants or douches to clean the vulva and vagina. In fact, using these products may actually interfere with this natural self-cleaning mechanism and make you MORE likely to pick up infections! And for goodness sake, do not steam your vagina or vulva, as no one wants a third degree burn down there (and yes, that has happened to some women).

I hope you have enjoyed this exploration of the vulva and even learnt a thing or two.

Stay tuned for future blogs to learn about what’s not normal below the belt!

In the meantime, stay safe, stay warm and stay healthy.

Yours in pelvic health,